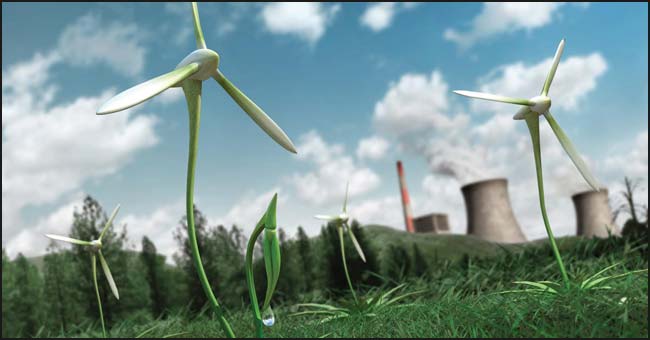 The world environment day celebration on 5th June received wide media coverage and support from all individuals and corporates in India. As the development of any economy moves north so does the factors responsible for environmental degradation. The hunger for natural resources like water and fuel for generating power also increases with the development process. The mining of coal for power or burning of fossil fuels for meeting growing energy needs becomes the norm with the change in the growth trajectory. The forest cover is depleted to have more land for setting up industries and housing for the ever growing population. With this comes the problem of environment pollution, degradation of the ecology and biodiversity issues comes to the fore. Jairam Ramesh, Union Minister of State for Environment & Forests, has recently said that conservation of forests is crucial for sustainable development and green economy of the country.

India’s energy requirements are increasing leaps and bounds. The demand and supply gap for electricity is increasing at a rapid pace. The main solution in sight and currently under execution is the usage of coal for generating power to meet the energy requirements of the growing industrial, transportation and housing needs of the nation. About 70 per cent of the electricity generated comes from coal fired power plants. This continues to add carbon emission in the atmosphere at a growing rate. Clean coal is the temporary solution to this problem. Use of Super Critical Equipment is also helping to reduce the carbon footprint. But these are all short term strategies to combat the environmental issues. The installed power generation capacity as on 30th April 2011 based on coal amounts to 54.3% of the overall power generation. In MW terms, it is 94,653.38 MW out of 1,74,361.40 MW. The coal consumption for power generation was 355 Million Tonnes for 2008-09.

The use of renewable energy such as wind, solar, hydro, tidal and geothermal energy holds promise for the future energy requirements of India and the world. India today stands among the top five countries of the world in terms of renewable energy capacity with an installed base of over 19000 MW of grid interactive renewable power which is around 11% of our total installed capacity. In addition, it adds about 2500 MW of renewable power annually. Its renewable energy programme is one of the largest and most ambitious in the world. The Government of India is taking pro-active measures to scale up the usage of renewable energy. On the solar front, it has recently launched the ambitious and game changing National solar Mission with a target capacity of 20 GW by 2022. With over 400 million citizens who lack access to modern forms of energy, it also has one of the largest decentralized off-grid renewable energy programmes. India is also one of the largest players in providing energy access to remote and disadvantaged people and remote locations. Even today, it has over 1.5 million decentralized solar applications, over 4 million biogas plants and over 5 millions sq m of solar thermal applications installed in some of the farthest and remotest areas of the country.

Jawaharlal Nehru National Solar Mission (JNNSM) was launched by the Government of India in 2010 as a part of National Action Plan on Climate Change with a view to develop an enabling policy framework for deployment of 20, 000 MW of solar power by 2022 and 2,000 MW equivalent off-grid solar applications. The JNNSM scheme will facilitate setting up 1000 MW grid connected solar power projects as part of Phase-1 up to 2013. JNNSM entails a system of purchase of solar power by NTPC Vidyut Vyapar Nigam (NVVN) and its sale to State Utilities after bundling of equivalent capacity of solar thermal power. In Gujarat alone, government has entered into power purchase agreements with 83 developers to commission 958 MW of solar power generation capacity. NVVN has signed PPAs with developers in January 2011 for 620 MW of capacity. The Cabinet has recently approved Payment Security Scheme to enable financial closure of projects under Phase 1 of the JNNSM by extending Gross Budgetary Support (GBS) amounting to `486 crore to MNRE in the event of defaults in payment by the State Utilities / Discom to NTPC Vidyut Vyapar Nigam (NVVN), the Central Agency which will purchase Solar Power from the developers and sell it to the utilities bundled with unallocated Thermal Power available from NTPC utilities. According to KPMG - Consultancy firm report, the technological breakthroughs and economies of scale will make solar energy more competitive in a span of six years. It estimates addition of 67,000 MW of solar generation capacity by 2022 which would be around 7% of the total power needs of the country. States like Gujarat, Tamil Nadu and Rajasthan are expected to take the lead in this direction.

India is trying to forge bilateral cooperation in the field of biomass, solar and wind energy. Recently, MOU for cooperation in Renewable energy was entered with Uruguay. India has also sought greater co-operation with Germany in this regard. India has offered to set up an international centre on energy access to boost the provision of energy to remote and inaccessible areas. To scale up use of renewable energy in the energy mix, the nations of the world need to cooperate more and share information, technology and best practices. Bilateral ties can also bring in investment in the RE sector as is visible in Tamil Nadu. Tamil Nadu Electricity Board (TNEB) has planned an exclusive transmission corridor project for wind power in the state estimated to cost `4,000 crore project to improve wind energy evacuation in the state. A Japanese agency has shown interest in funding this project. US based firms are keen in exploring promotion of solar energy options in Punjab. These firms would like to set up units in partnership with industries in Punjab and in other parts of India. Vikram Solar, a crystalline photo voltaic module manufacturing company, has entered into a 51:49 joint venture with Proener Renovables of Spain to supply plant and machinery for solar power projects on a turn-key basis.

The initial capital investment in renewable energy projects is generally high and their viability is very much region / site specific. As such, the cost of renewable power generation is generally higher in comparison with the traditional sources. State-owned Power Finance Corporation is planning to float a subsidiary, Power Finance Corporation Green Energy Ltd, to finance the renewable energy projects in the country. Last financial year, PFC had sanctioned around `3,000 crore to various projects under the renewable energy segment and disbursed around `1,800 crore during the period.

A budgetary provision of `253.06 crore has been made for research and development in new and renewable energy for the first four years of the 11th Five Year Plan of the Ministry of New and Renewable Energy (MNRE). Against this provision an expenditure of `199.74 crore has been incurred on R&D in renewable energy sector during the last three years and the current year (upto February, 2011).

Micromax plans to set up a `630 crore facility in Himachal Pradesh to manufacture solar energy cells. This project was approved by the state-level Single Window Clearance and Monitoring Authority. Vikram Solar plans to double the photo-voltaic panel production capacity at its Falta unit in West Bengal. Suryachakra Green Power Pvt Ltd has entered into MOU with Winwind Power Energy Pvt Ltd for setting up a 250 MW Wind Energy Project at Dharapuram, Tamilnadu.

RE potential is estimated to be about 89,000 MW for power generated using different renewable energy sources excluding solar energy which has been estimated for most parts of the country at around 20 MW per sq km of open, shadow free area covered with solar collectors.