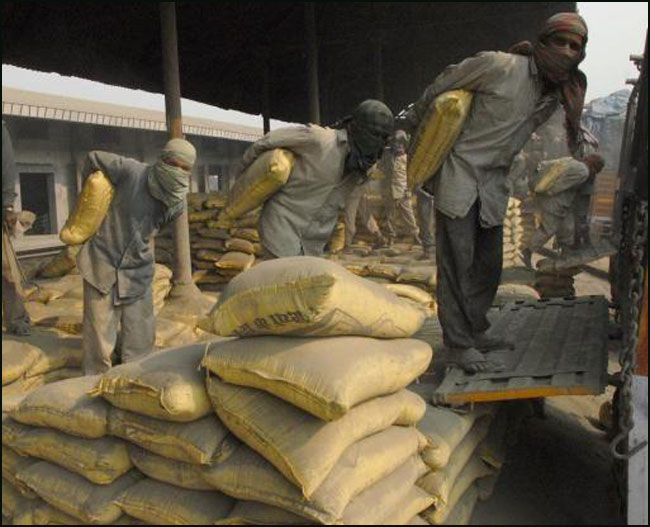 India is the second largest cement producing country after China with 137 large and 365 mini cement plants. The large plants employ 120,000 people; according to a recent report on the Indian cement industry published by CMA. Cement Sector is one of the vital constituent of the construction and infrastructure sector. In any kind of construction activity like housing, ports, airports, commercial outlets, manufacturing plants, power generation or steel plant, the requirement of cement is always there. Lower volume coupled with higher operational cost is the area of concern in the last quarter for many of the industry bigwigs. The sharp increase in raw material cost such as gypsum, limestone and fly ash is putting pressure on the margins generated. JK Lakshmi Cement had reported earlier 54.42% dip in its net profit for the quarter ended March 31, 2011 at Rs 31.96 crore due to higher expenditure on fuel and transportation. Coal has become dearer. The onset of monsoons and lower spending on infrastructure projects in the last couple of months is dragging sales down. As per industry sources, the southern region of our country has witnessed sharp decline in cement sales. Cement prices have come down by Rs 15-20 for a 50-kg bag all over India.

The industry is facing over capacity situation and due to this some of the industry players like Kesoram Industries Ltd has postponed its cement capacity expansion project to a later date. As per recent news reports, the timeframe for completion of Vasavadatta cement unit expansion comprising raising clinker capacity, setting up of a 18 MW CPP, grinding facility in Maharashtra has been extended beyond 2012-13. Due to unfavourable demand-supply scenario, companies are delaying or re-working their expansion plans. Ambuja Cements Ltd, part of the Holcim Group, has sought more time from the Andhra Pradesh government for executing its proposed greenfield cement plant at Nadikudi in Guntur district. The current consumption is almost 80 per cent of the capacity available in the country. The housing sector consumes about 65 per cent of the total production. Cement demand was very much affected by the general slowdown in the infrastructure and real estate sectors due to rising cost of finance. The increase in the pace of infrastructure development and a low interest regime can only bail out the cement sector out of over capacity and low demand situation.

Birla Corporation Ltd plans investment of Rs 1,025 crore over the next one and a half years for expanding its cement and power capacity. The cement capacity will be expanded to 9.30 MTPA. The expansion programme includes 1.20 MTPA capacity increase at Chanderia in Rajasthan and 0.6 MTPA at Durgapur, West Bengal.
Everest Industries Ltd proposes to acquire land and set up plant for manufacture of Fibre Cement Products in Orissa at an approximate cost of Rs 50 cr with a capacity of 100,000 MT p.a.
Shiva Cement Ltd has signed an MOU with Government of Orissa for expanding the plant capacity upto 2.6 MTPA in two phases at an estimated cost of Rs 800 crore.
KCP Ltd Muktyala Cement unit with a 2500 MTPD Grinding Capacity and a line of Packing Plant with a capacity of 4500 MTPD was commissioned in May 2011.
Vibgyor Group promoted Forza cement factory with 200 TPD capacity was commissioned at Bishnupur. This unit was built at a cost of Rs 5 crore and will manufacture Portland slag cement.
Gujarat Mineral Development Corporation (GMDC) has cleared limestone linkages for many of the cement projects announced during Vibrant Gujarat Summit. Companies like Reliance Cementation, Adani and ACC may benefit due to these clearances from GMDC.
Reliance Cementation Pvt Ltd (RCPL), the cement arm of Anil Ambani has issued letter of intent (LoI's) to European engineering majors Polysius, FL Smidth and Loesche.for equipments for its upcoming Satna I unit in Madhya Pradesh with a capacity of 5.08 MTPA.
Century Textiles and Industries Ltd aims to complete it’s upgradation and expansion programme by March, 2013. In this regard, the main plant and machinery order for the 1.5 MTPA grinding unit at Sonar Bangla Cement have been placed. This unit is located at Sagardighi in West Bengal.

In January 2011, Fitch Ratings has rightly predicted the 2011 outlook for the Indian cement sector as negative to stable, reflecting continued overcapacity during the year, which would lead to continued pressure on cement prices. The agency had noted earlier that although the anticipated capacity increases are likely to outstrip the growth in cement demand in FY11 and FY12. Fitch forecasts a growth in demand of around 10% and a growth in total capacity addition of 12% in 2011. Addressing the 91st AGM Harsh V Lodha, Chairman of Birla Corporation Ltd has recently said, the profitablity of the company was affected because of pressure on prices and also because of the rising coal and fuel costs and other inputs. Mr Lodha has attributed the increase in capacities in the industry and poor demand from institutional buyers, including the Government as the reasons for sluggish growth. The cement industry is expected to grow by 8-10 per cent as per Mr Lodha. The improvement in the cement demand is expected from 2012-13 as per industry research. Cement production in the country is expected to touch 315-320 million tonne from the current figures of 300 million tonne by end of current financial year. As per annual report of Madras Cements Ltd, the surplus capacity situation is likely to continue and increase pressure on prices in the southern region. The cement industry would continue to experience lower capacity utilisation levels. Inflation would also affect the costs of various inputs of production and distribution, thereby affecting realization.